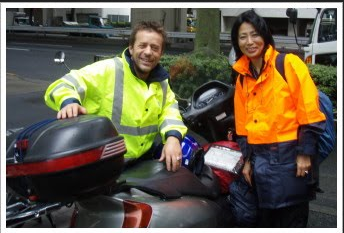 Graduated as Youth Camp Organizer and Director.
he is also an Youth and Sports Ski Instructor .

With 20 years of Judo practice and a 3 Dan Black Belt,
he flew to Japan in 1992 for 3 months to complete his Judo Master degree and never left.
He trained daily 4 year at Waseda University in Tokyo
Finished 3rd at the Kodokan Foreign Tournament.

He worked :
– as French Instructor at Ministry of Foreign Affairs of Japan
… but also taught French at Junior Senior High School as well as for 3 Fashion Universities.
– as Mac Specialist at AMJ, an internet support company that busted with the Bubble
– as Representative for Telematrix selling “Call-Back systems” to individuals & companies throughout Tokyo

He holds French, Japanese and Malaysian bike and car driving licenses with a Clean accident record.

we are Not professional runners thus …
we are respectfully the only known French Male and Japanese Female Runners to have completed :
7 road marathons on 7 Continents all AIMS Distance Certified.
We nowadays help local running events as pacer or volunteer during running race events.

Thierry also wrote an article for a French Running magazine for Women about Tips and Tricks regarding the Famous Tokyo Marathon he personally ran 5 times.

We also been mentioned in a Brazilian Online Article : O Globo !

Non-smoker, drug-free with no Children nor dependent or other commitments that might distract us from an assignment.

We are Financially self-supported.

We have been home and pet owner
so we fully value and respect other peoples property, animals and all the things they care for.