After all those races, marathons and couple of Ultra to 50 km trails, done
I decided to give a shot to a Road 50 Miler and yet might have not learned from the past “experiences”…
– Dealing with that chronic and recurring Stomach pain and what could trigger it –

I have been confident to the point to bring during that Ultra a Sports drink i have used overseas but never tasted nor tested in Malaysia before – and I trust here that was a BIG MISTAKE – 2 bottles of 500 ml of Gatorade Lime which
I believe to be Today’s Culprit.

• 9 PM off – Penang Ultra 100 and 84 km on the go
Not Haze in the air but a High 30º T and Humidity
Browsing, zig-zaging through Saturday night traffic
I started slow – 8 mn/km and by km 4 had a sip to keep hydrated as I was a soaking wet
The Gatorade Lime was pure sugar in liquid form
and I normally avoid high-fructose sports drinks that are sweetened only with fructose or hypertonic beverages.

Mistake Nº 2 ( I assume ) :
I kept having sips, at minimum – but kept having sips
Even if i know i can run a flat half marathon without a single drop of water
it was way too hot, my body heavily sweating –
I ended up with opposite effect – instead of doing what it is suppose to do quench my thirst and replenish my electrolyte needs, it gave me a nasty mouth feeling and I kept “dehydrating”.

Check Point 1 – 13.5 km
I got rid of my Gatorade and refilled my 2 bottles with water and 100 plus ( fuzzy sport drink )
yet Damage was done –
Gatorade had, i believe , triggered my now chronic stomach pain that forced me to slow down, alternating jog/walk
I tried some bread/red bean I was carrying just to find out i couldn’t take already any solid (!)

CP2 – 26 km
I texted Miyuki as we agreed to let us know where we were
I tried to force a cereal bar into my body – I went into full reverse mode . vomiting all liquid i had ingurgitated
Miyuki came in – she worried about me
but we knew the drill with plenty of Medic and Ambulance around, everything was there if i needed
I told her to leave me “alone” so to speak and to go on with her run .

CP3 – 36 Km
With no solid just yet, only 2 salty crackers as any sugar won’t pass
and now if we all know that the color of urine, the clearer the better, is often considered a reliable indicator of your state of hydration, I was peeing very dark red – was peeing Blood –
I rested until cut off limit – assessing the damage.
I could hardly see myself carrying on another 50 km like that
but I decided, by turning my Phone into a Music player to Jog a song – Walk a song,
to force myself to the next and only CP where I knew I would find real food provided by Race
something solid my body would or could tolerate.

CP 4 – 48.7 km
Hot Noodles, Coke and … Watermelon !
I managed to gulp down some hot noodles and Watermelon with Coke
the duo WaterMelon – Coke worked as a Charm at last water station during my 6Foot track a 45km trail stretching across the Blue Mountains, so gave it a go !
I could have had more but staff was putting pressure on runners Shouting : Cut off time, Cut off time, Get out! – I took off.
That should serve me as a “Beginner” mistakes :
Why on earth …:
a) I did not have small pieces of watermelon into my Bottle instead of refilling it with Water
b) I did not grab more hot noodles, walk out of Cut off Zone to eat and drink peacefully on side of the road …

I managed to power-walked 6 km of uphill as I was felling much better and my pain had stabilized
I then started running down hill,
However the energy faded and pain came back excruciating.
forcing me to walk to next CP

Pros and Cons about Peang Ultra 84 :
Big thanks to Andrew – race organiser – for being very accommodating with my very special late entry !

– Course starts through traffic, not ideal but that S-E-A and it’s only 2 or 3 Kms
then very well assisted with Marshals at crossing – Ambulances, assistance on Motorbikes, Police on the Road –
I then can’t comment on the bit of the winding part between Batu Ferringhi and CP6 as I DNF before,
but Miyuki took it slow and was not all to concerned about traffic –
Police Cars and Marshals on bike slowing down the light Sunday morning traffic – Excellent safety measures in place –

– CP & THE question about CutOff few runners are complaining about
Penang Ultra had officially and only one recorded cut off time by CP as per rule: Arrival times
– 4. Participants must check or sign in at all checkpoints (CP) with the checkpoint officials along the route.
Participant’s arrival times will be recorded.
However Marshals kicked everybody out of CP by that Specific cut off time – Why ?
as per understanding, a Runner that have reached CP could have stayed as long as he wanted as there was …
no EXIT cut off !
I had a chat with Andrew about it and he claims that it’s because otherwise runners won’t make it to next CP …
yet breaking his own Ultra Penang rules and regulations adding to fact that a 5mn extra time spent for toilet, changing gear, seeking Medical assistance or eating can be a game changer and be just enough to then … resume running making up for the “lost”time !

Read also comments from different runners about that extra Km added to the race without adding or extending cut off time but by a mere 3 mn earlier start
or that tight “ time “ to cover the distance between CP 4 and CP 5 which could be considered the most demanding 13 km of the entire race.
*NB: Let me be painfully direct here to them, as Miyuki and Myself have compassion for those complaints
by finishing amazingly strong on her very first Ultra
Miyuki and her – 4th Overall Female Trophy would refute any DNF runner’s Bla Bla Bla !


– Stomach Pain & Looking for an Answer !
I have over the years been able to solve my knee and ischio issues to running entirely injury free
by being open and testing a different approach going from full support in Kayano – Duomax to Neutral Skyspeed
then Minimalist on Trail and Crocs on road –
I’m still out there trying to find out what can be the real possible cause of that sharp stabbing stomach pain …
We can all think about Runner’s common stomach issues but the first time it happened, I was in Japan at home and getting myself ready to go out, no bloating due to over-drinking during efforts here
I had all medical tests possible : X-Rays , CT scans, Abdominal echography,
All results came as normal, all green light .
We can hardly talk about stress as it reappeared while running
a friendly –LaPaz Death Road – 37 km downhill in Bolivia
and then during my first 50 km FatAss in Nepal …
I have not a single clue, a cause .
No-one so far can explain it and I’m still in the search
~ I have cut down on Salty peanuts or snickers during my runs which I thought could have been a possibility
~ Have excluded Coconut Water which I carried during my 50 km FatAss in KTM
~ I have been pain free during all my 3 months in OZ while doing long Runs and Ultra Races …
~ Pain free last month during our 55 km night run through Tokyo with Miyuki when helping her to have a shot at longer distance than just full marathon
So Damned why today ?

– Highly frustrated –
Not because of the race nor my DNF but …
because in 8 years of running around the Globe
I have tonite simply run for the MEDAL.
An awesome OWL that can be worn as a Belt Buckle
and as a disappointed OWL collector – with more than 500 Owls at Home
I will never be able to wear it – Unless if … ! 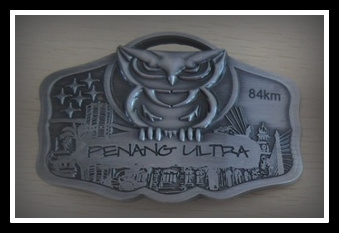 It was awesome weekend to have you to run together in the Penang Ultra 2015.

Thank God heard our prayer for a Haze free day, unfortunately I short of begging for a good weather. With the average of 76% humidity (min 54% ~ max 94%) and 27.56°C temperature (min 24°C ~ max 31°C) in the 18 hours run, you are brave enough to stand at the starting line, breaking thru the busy traffic, total darkness area, heat, rain and excel throughout the race to cross the finishing line.

It is, a challenging week prior to the flag off, from the changing of route due to last minute heavy construction, examine with local authority on the Rabies issue on affecting the race, custom clearance department on hold some of the race pack item, 200m+ fence collapsed just on the path towards CP 1 in the Saturday morning and etc..

Nevertheless, that make all of us even motivated in making the event come thru.

We would like to thank the Penang State Government and Majlis Bandaraya Pulau Pinang for the continuous encouragement and support for this meaningful event. The gratitude Masmeyer Foundation as the main sponsor as well as others sponsor who gave us the confident to make up this event. The full force support from Polis DiRaja Malaysia on both Barat Daya and Timur Laut, local council enforcement department, Rela patrolling, St John with 5 doctors’ standby, boy scouts from 3 local schools, all check point volunteers, running communities friends and buddies who come forward to support to man the junctions, check point, safety of runners and etc.

We hope you have a good run with unforgettable experience touring Penang Island thru out the race.
Unfortunately, we do accept that there are some shortfall for improvement such as followings –
• Ran out of Isotonic drink before the last few runners arrived in CP 1 (Lesson learnt, we shall allocate extra 10% more in future for this CP)
• Check Point transparency which resulted some DNF runners debating on cut-off time (Lesson learnt, there will be a clear display of live timing in future)
• Loss of few markers before reaching the finishing line (To have extra spare markers and double marshalling)
• Runners who participated the run lack of mandatory items (To have more educational information feed to participant on the safety and important of following the rules)
• Cheating runners !!
Well… speechless, we know who and caught some but was greeted our ancestor and wanted to fight with our crews. We are healthy sportsman in a remarkable international running event called Penang Ultra, not MMA!
• DNF, we do understand ultra-runners determination and strong power of completion to complete the race within cut-off time, we hope for the safety of ownself, do respect the rules.

I personally would like to take this opportunity to apologise should you have or faced any unpleasant in the event, hope to hear your feedback in order to make us improve further.

Also thank you for your participation and hope to hear from on your sharing and the running experience soon.

We’ve come a long way from where we began, thank you for your continuous support and encouragement. Hope you have a good rest and recovery, till we meet again.